Simply put, Bessie is the rhinoceros who watches over the SMFA at Tufts campus. Clocking in at 13’ long, Bessie is a life-size sculpture of an Indian Rhino who guards our front door. And she has quite a regal air about her. In fact, she was named after a queen, Queen Elizabeth I or “Good Queen Bess” of England, but Bessie is more than just the Queen of SMFA. Let me start from the beginning...

Bessie was created by Katharine Lane Weems, who attended SMFA starting in 1917 as a passionate craftsperson and artist despite her lack of formal training. She had a love of art thanks to her father, Gardiner Lane, who was president of the Museum of Fine Arts during Weems’ childhood. To build skills in observational sculpture, Weems and her friends took trips to the Franklin Park Zoo and the Bronx Zoo, where she met an Indian Rhino named Victoria. As Weems fell in love with observing and capturing the unique forms of the natural world, she gained a reputation as a talented animal sculptor. In 1937 Weems was commissioned by Harvard University, and Victoria would serve as the model for a pair of bronze Indian Rhinos that flank the entrance the Bio Labs. Yes, it’s true—Bessie has a twin at Harvard, but they’re not quite identical. Bessie is a copy of one of the rhinos at the Harvard Bio Labs, Victoria and Bess, made of fiberglass with a patina that, to the naked eye, looks like a bronze cast. The sculpture was donated to SMFA in 1987 to celebrate a renovation and expansion project, half a century after one of Weems’ first high profile projects. 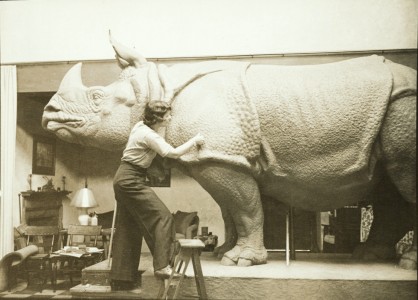 Despite Weems’ work to build a network of mentors and collaborators, the odds were against her (thus the title of her memoir, ‘The Odds Were Against Me’). As a young woman trying to develop her own identity and career during a time of oppression and global turmoil, Weems’ absolute drive to make a name for herself in the art world exceeded all expectations except her own. What better symbol of grit, determination, and stampeding obstacles than a giant rhino, I ask you? When Weems visited her rhinos years later, a student remarked to her, “Did you know those were done by a girl?” And although the playing field has leveled since Weems’ time, the spirit of SMFA remains the same: you bring the passion, the desire to make groundbreaking artwork about the things you love, the drive to start your creative career –and we’ll teach you the skills to make it happen.

If you follow Bessie’s northbound gaze about 5 miles to the Medford campus quad, you’ll find Jumbo the Elephant, the Tufts University mascot. The circus! Blazing fire! A mysterious jar of peanut butter! Etymological history! ... Jumbo has a pretty crazy origin story in his own right, and Tufts students take pride in the traditions that accompany his 12,000-pound presence. Tufts University has five campuses, each with a particular set of resources to serve our students and a unique campus vibe. On the Medford campus, Jumbo epitomizes our immense school spirit –touch his tail to ace an exam or visit his remains for good luck in athletics. On the SMFA campus,Bessie serves as a reminder of our history and a frequent model for our current students.

Now, we don’t necessarily call art students here the SMFA Bessies. You’re still Tufts Jumbos (‘Bos for short), so go ahead and buy your proud parents that “Go Jumbos!” bumper sticker. But every time you walk into SMFA, you can wave hello to Bessie, remember the legacy of our awesome alumni, and feel some warm fuzzies for our special SMFA at Tufts community.