Tufts benefits from world-class departments of History of Art and Architecture, Theatre, Dance, and Performance Studies; from BFA and combined degree programs in its School of the Museum of Fine Arts; and from its special relationship with the New England Conservatory of Music, where Tufts students may pursue combined degrees or take classes. Outside of the curriculum, Tufts students are engaged in myriad fine and performing arts groups, many student-run, and are able to take advantage of opportunities to participate in music and artistic expression in some of the most beautiful performance halls and galleries in Boston.

With over 180 performances on campus every year, Tufts’ vibrant music scene includes student-run a cappella groups and bands, 18 performance ensembles, and classes open to all Tufts students regardless of prior experience. Student groups can practice in one of three sound-proof Wenger booths at the Perry and Marty Granoff Music Center. After practice, you can peer into rehearsals of the opera ensemble, the jazz band, the Indonesian gamelan housed in our World Music Room, or catch a chamber music master class. On campus, you’ll find African drumming and dance, as well as Arabic and Jewish music – and then there’s Boston itself, with opportunities as far reaching as the New England Conservatory and Jordan Hall, popular concerts at major venues like the TD Garden, and bands at the famous Paradise Rock Club. Some students enroll in a combined degree program with the New England Conservatory.

Students interested in the fine arts at Tufts may delve into classes in the Department of Art and Art History, pursue a combined degree or Bachelor of Fine Arts at our School of the Museum of Fine Arts, and involve themselves with exhibits at the Tufts University Art Galleries, which feature works by John Singer Sargent, Pablo Picasso, and Andy Warhol, among many others. Boston has an abundance of museums for the art lover: the Museum of Fine Arts is probably the best-known destination in Boston for viewing paintings, photographs, prints, sculptures, and other art objects from ancient times through the modern age. For a contemporary perspective, visit the Institute of Contemporary Art in Boston, or if you have more eclectic tastes, the Isabella Stewart Gardner Museum may be the place to explore.

So You Want to Dance at Tufts?

A World of Music

Tufts lecturer in music, Joel LaRue Smith, helped compose a musical that will make the audience think about issues of race, justice and bias.

As part of the ongoing expansion and improvement at Tufts, the state-of-the-art Perry and Marty Granoff Music Center opened in February 2007. The impressive 55,000-square-foot facility features a 300-seat recital hall of broadcast and recording quality. In addition, it houses a music library, a world music room, rehearsal and private practice space, classrooms, and seminar space.

At the center of Tufts’ arts community is the impressive Aidekman Arts Center, which is home to an enormous exhibition space, a unique 220-seat round theater, a 600-seat multi-use auditorium, two dance studios and dozens of private music rooms, rehearsal spaces, and classrooms. Aidekman is the home to the Department of Theater, Dance, and Performance Studies and the Tufts University Art Galleries. 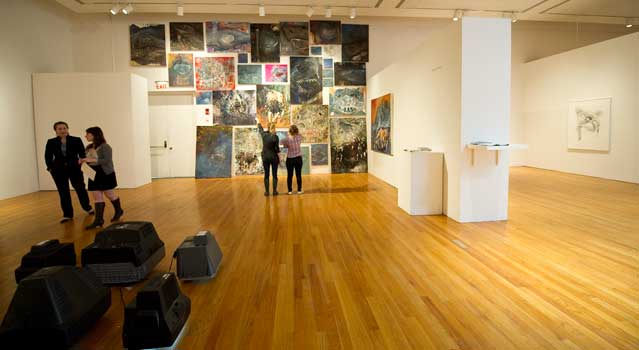