Why Tufts: From Current Tufts Seniors

Hello! It’s been a while since the last blog post and I hope you are all doing well! On decision day, two of my fellow senior friends and I wanted to take some time to share with any current and prospective students our own “Why Tufts” responses.

The following interview was conducted in person at the Commons in the Campus Center.

A very big thank you to Diana Morrill and Jesse Litvin for taking time to share their Tufts experience! 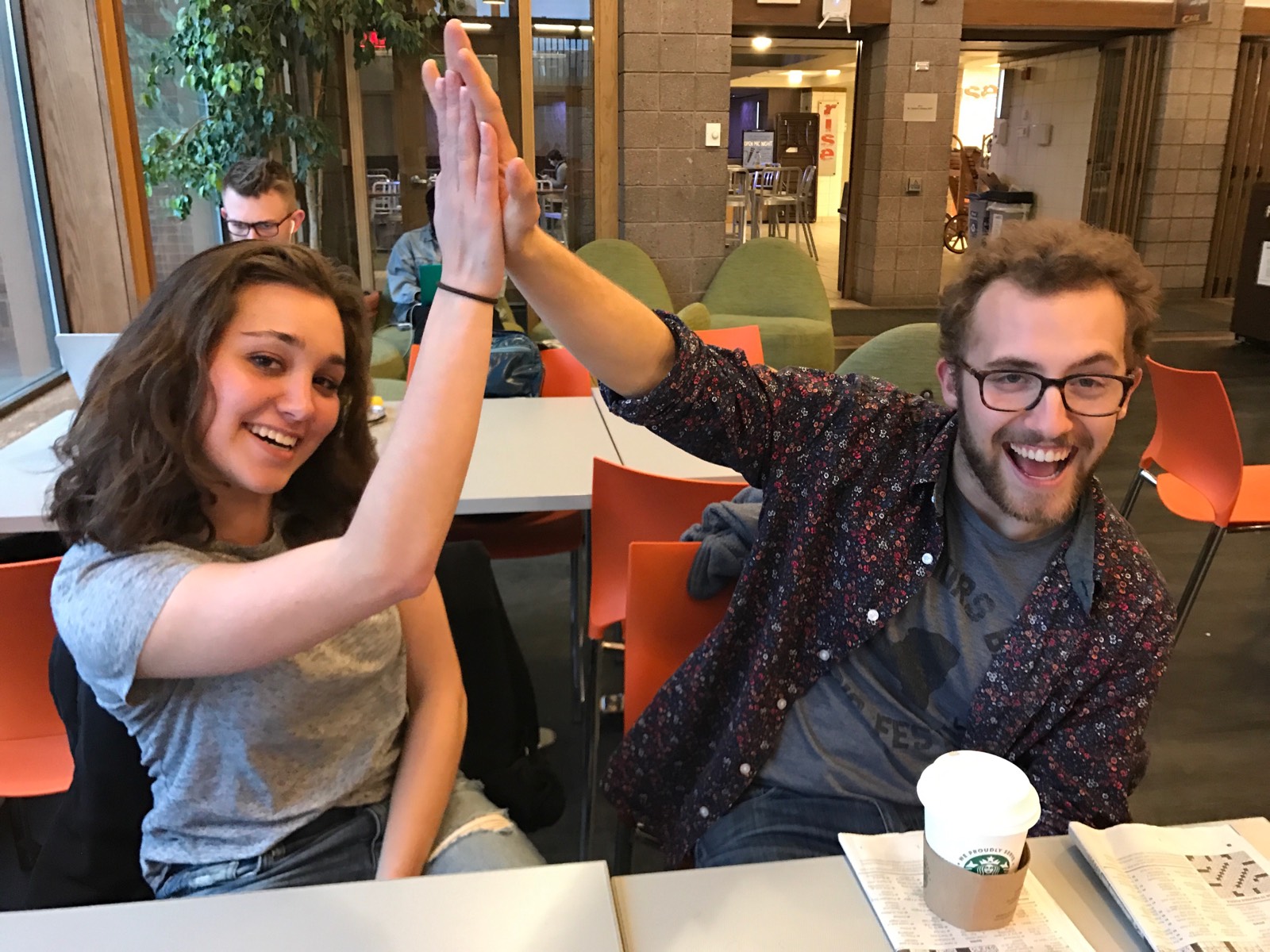 What is your favorite place to get a meal on campus?

Diana: The Kosher Deli is really wonderful and underrated. Also, Carm dining hall because I have a lot of memories there.

Jesse: Carm. I’d say my second home, but I lived in Carm, so my first home. I do love Carm dining hall. I’m also a fan of Kindelvan Cafe. They have some really good hot bar options, especially this coconut tofu thing- it’s quite good. They have a lot of veggie options- it’s like the best veggie spot on campus. They also sell one, hard-boiled egg for 89 cents, which means you can get five of them, for around $4.45, if I’ve done my math correctly.

J: I just had it actually.

J: My favorite class in my major is Intro to Civil Engineering. It’s a broad look - we’ll spend a day on each large aspect of civil engineering - and we get to crush wood in this machine that tells you how many pounds it takes to crush wood. The professor is Chris Swan who is the best. He is so much fun and he would always play music when we would go in.

My other favorite class was probably Dulcimer Design at the School of the Museum of Fine Arts at Tufts (SMFA) where you get to build your own musical instrument. I built my own mountain dulcimer. It was taught by Walter Stanul and he was this guy who knew everything one could possibly know about a woodshop. If you had to imagine a guy in a woodshop, it would be him.

D: My favorite Community Health class is the one I’m in now, which is Community Based Participatory Research taught by my advisor, Shalini Tendulkar (shout out to you). We do a lot of tangible work, which is nice, and we are also partnering with an organization in Medford and it’s nice to get off campus and do that.

My favorite non-major class is hard. I took the Foundations to Photography class which was fun. They give you a lot of freedom to do what you want. It was very time consuming, but I enjoyed it.

What is something you have enjoyed doing in the area?

J: I love to bike and there’s so much good biking in the area. There’s a place called the Minuteman Bike path. It’s so much fun and it’s one of the best bike paths in America - it’s ranked in the Hall of Fame for Rails-to-Trails organization. And you pass Kickstand Cafe, a great cafe nearby.

D: Central Square in general. It has the Havana Club, a salsa club, and they have Thelonious Monkfish.

What is your favorite workspace on campus?

J: Right here, the best spot of all: the Campus Center. I’m constantly seeing people I know and then not doing my work which is exactly the point. It’s the best, there’s food nearby, there’s friends nearby, there’s coffee nearby…I don’t really do much work here, which is great. And you too should do work here.

D: I also enjoy the Campus Center. I was going to say Carm because you can sit there all day and get food, eat and enjoy friendship, and also do work. Also, late night Carm during finals. It’s a time when people go to Carm, drink coffee at night, and work on their finals. And there’s this sense of camaraderie and homework doing which makes finals so much less stressful and more enjoyable.

What would you say makes Tufts unique?

J: I don’t think there’s any other university that is also named Tufts University.

J: The people here. It’s a nice balance, where the people here are really smart, not that you can’t find that at other schools, but they’re consistently really smart and not pompous about it. You can really have a good conversation. I can talk about foundation design with my friends and then talk about whatever young kids talk about these days.

D: I think there’s a lot of open conversation and different opinions. So that’s nice. People are really friendly, and we sort of take that for granted when we go to school here.

What’s a favorite memory you have of Tufts?

J: It’s Parents and Family Weekend freshman year, and I went to hang out with a lot of people in a dorm room. I met this nice guy there and I had worn my hat there. Then I lost the hat throughout the course of the night. I just kind of gave up and was about to leave and this guy was like, “Hey Jesse, I found your hat.”

And now I live with him. And he’s one of my best friends.

D: Mine is from Jumbo Days. I was talking to Lee Coffin. I said “Hi, I’m Diana, I’m from Lexington.” And he was like, “Oh, I know who you are!” I guess he does admissions for my hometown, so he was able to spurt some facts out about me. It was nice because I immediately felt like someone knew me. And we had this really nice conversation, where he said something about my admissions essay and how I played soccer.

D: I just want to say that I read these blogs before I applied to Tufts and they were a major factor in my decision to come here. I think they give a really good sense of who comes to this school, like what kind of people go here.

J: I tend to trust my intuition a lot, which is going to sound very vague, but I just got a good feeling from the people here - the people who spoke to me on my tours, info sessions. And then I came and it was a school full of really nice, fun, interesting people, which was exactly what I thought it was going to be, which was nice. I think you can find similar academics at a lot of schools and I was really going for the people.

A piece of advice you would give to prospective students?

J: Find a thing that you like doing and in times when you get stressed, make room for it. And there’s always time for things that you like doing. And by no means should you ever cut out things you enjoy completely for school work. If I have a free hour, I’ll try to hop on a quick bike ride. Every single morning, I get up and make an omelette, because I really enjoy it. Make time for the things you like, and you will be okay.

D: Be open to making mistakes and then learning from them. And enjoy the process. Don’t get too caught up in your small mistakes, because it’s about growing.

The past two weeks were just normal weeks during the first month of school for most of the students at Tufts and across the US, however, that was not the…

I'm back and I'm happy

Hello! It has been a while since I have posted here. Just to give you an update: I began my second year at Tufts!! I still can’t believe it and I am amazed…

"So what year are you?" I cringe every time I get asked this question because of the answer I then have to give: I'm a senior.