Thoughts on preparing to leave America

As usual, I have no idea what I’m doing.

For me, not knowing what I’m doing is more than a habit: it’s an art form. I’ve essentially blundered my way through twenty years of life, doing my best and hoping that it all works out. But occasionally I look back and wonder, “How did I get here?”

My problem—or at least, one of the many—is that I try to do too much at once. Last year, when I was a sophomore, I was an editor for two different sections of the Tufts Daily. I wrote forty articles second semester, which translates to roughly two articles a week. I was co-chair of the Entertainment Board. I was a member of the Experimental College Board, and also worked at the ExCollege for my work study. I was the secretary of the Science Fiction and Fantasy Society. Plus, I had to deal with my classes, which is kind of the purpose of this whole “college” thing. 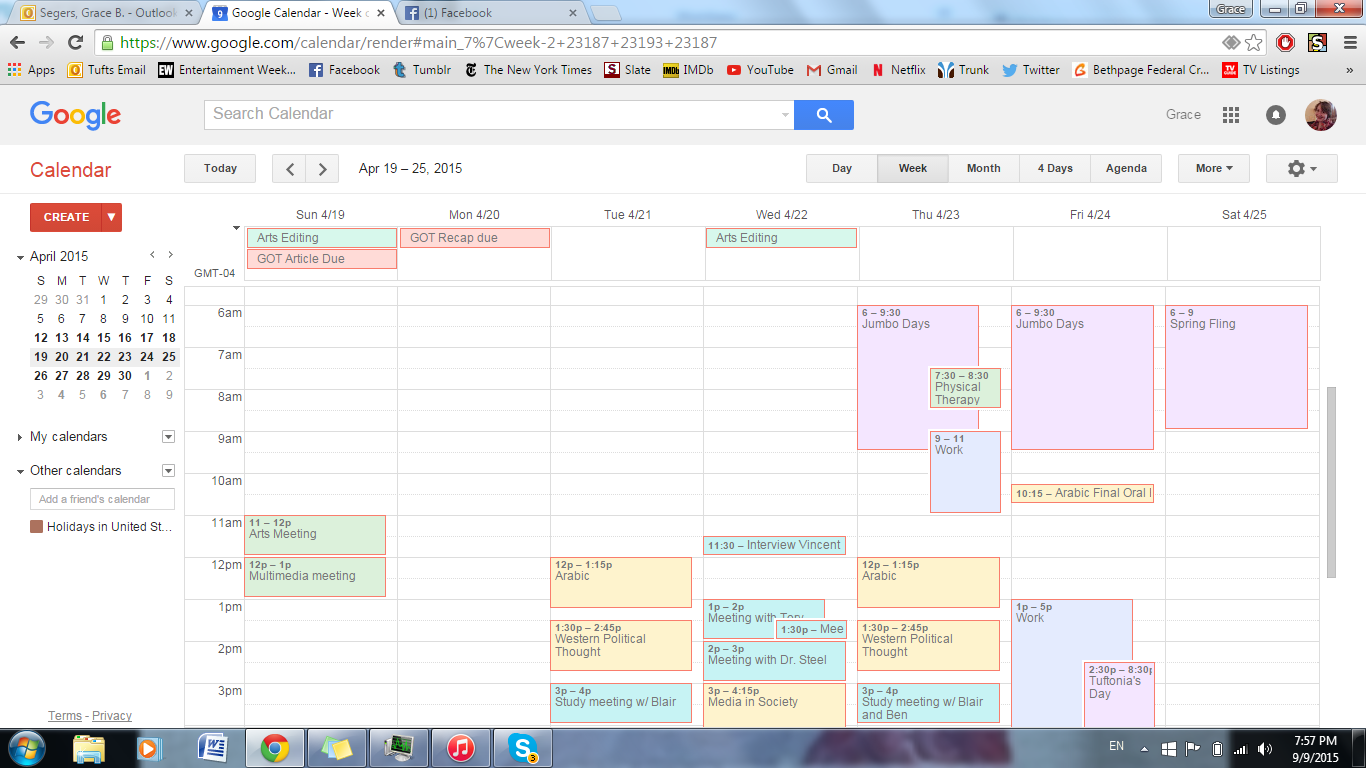 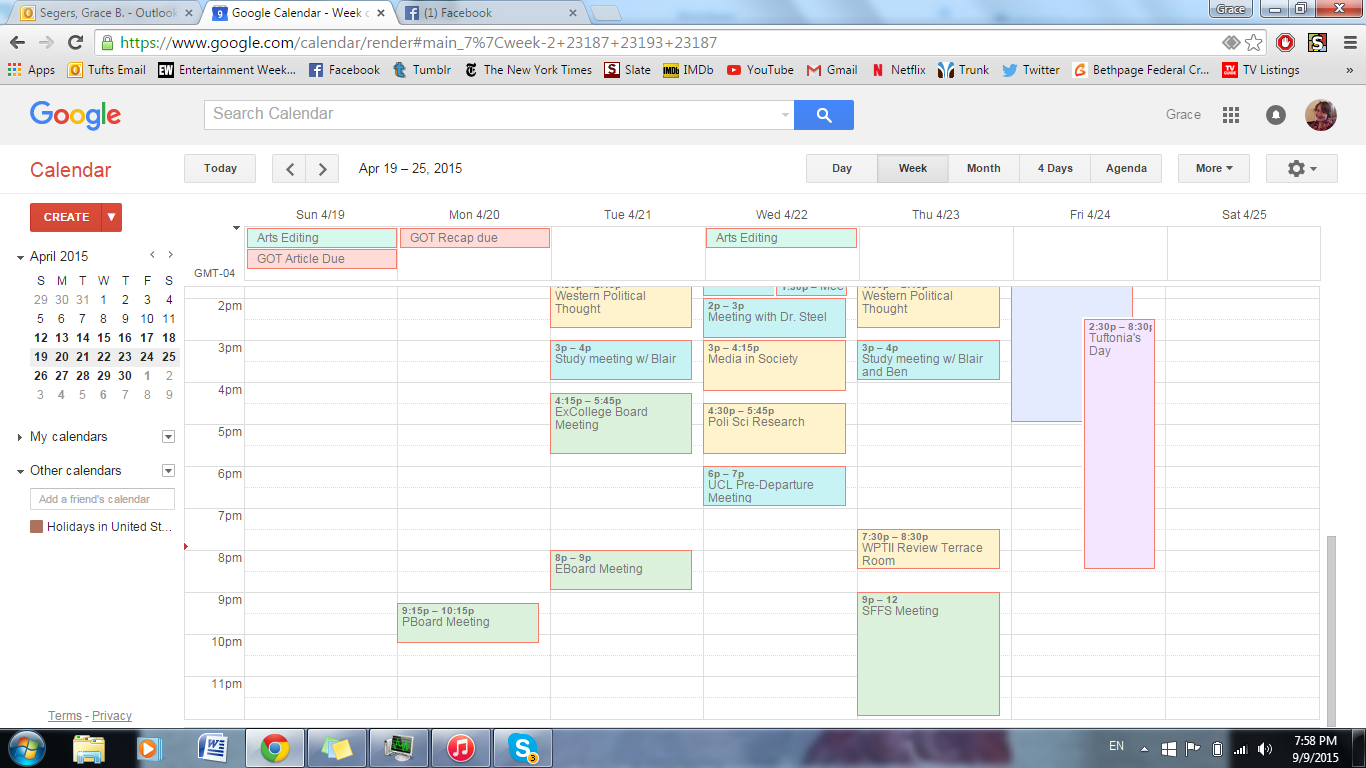 This was my Google Calendar schedule for the week of April 19, spring semester. It was a doozy.

I was pretty busy. Because I have no idea what I’m doing, generally in life, I figured that I could just make it up as I went along. I worked myself way too hard, hoping that doing my best would be good enough for all of these commitments. I ended up doing pretty well, but I swore to myself that I wouldn’t overwork myself again during my junior year.

This year, I was accepted to study abroad at University College London via the Tufts-in-London program. Starting September 13, I’ll be in London for the full academic year. It’s vaguely terrifying that I’m an upperclassman in the first place, not to mention the fact that I’ll be studying abroad for the entire year.

Not that I’m not excited, because I totally am. I’m going to be in London! For a year! Studying at one of the best academic institutions in the world! People would kill for that kind of opportunity, or at least maim. I’m excited; I just also have no idea what I’m doing.

I tend to over-commit myself, as mentioned above, and I like to have a plan. I like to give myself a schedule and follow it to the letter, even if that schedule breaks my spirit and stresses me out enormously. But my schedule for London is incredibly nebulous. I don’t know what classes I’ll be taking. I don’t know if I’ll join any clubs—I told myself I wouldn’t work too hard or do too much, and I mean it. But I’d like to have a little certainty, and right now I feel like a confused college freshman all over again. The butterflies in my stomach don’t know if “winging it” is a good enough strategy for foreign survival.

I have less than a week to go before I travel to England. My mom and I have begun packing, a terrifying task that involves two fifty-pound suitcases and a lot of creative folding. It’s all beginning to seem very real, which is a tad nerve-wracking. I have my visa, I have my suitcases, I’m not at Tufts right now. This is actually happening.

In this anxious time, I’m reminded of the immortal words by April Ludgate from the show Parks and Recreation. (Ironically, she’s talking to her husband Andy in this quote, who is afraid of going to England to do his new job.)

“I’m going to tell you a secret about everyone else’s job,” says April, “No one knows what they’re doing. Deep down, everyone is just faking it until they figure it out. And you will too, because you are awesome and everyone else sucks.”

So yeah, I have no idea what I’m doing. But I do take comfort in knowing that I’m not alone, because everyone’s going through the same thing. I have friends who are also making it up as they go along, friends who support me when I screw up and congratulate me when I succeed. Last year when I got crazy busy, I still had people who were there for me, and I was there for them. I think that the real trick to winging it is having backup, and I have some pretty good backup.

About the Author
Posted In
Study Abroad