My Journey to the Hill

I have a pretty unique story when it comes to how I found Tufts. When I was twelve years old, I was dragged along as my older brother went on his college tours. I remember being really annoyed about this and complaining A LOT. But for some reason, when we got to Tufts for the tour, I was very interested. I was asking so many questions that my dad pulled me aside and told me to “pipe down” because I was “stealing my brother’s shine” (a quote that I remember nearly eight years later). I obliged and was quiet for the rest of the tour. But again… I was twelve. So when we arrived at Dowling at the end of the tour, I was bursting at the seams. I went up to a woman standing in the lobby and asked, “What do you do?” She said, “I’m an admissions officer.” I asked her if she remembers every application that she reads; and she responded by saying “I try to find something special in every application.” I followed by asking, “Will you remember me?” to which she replied, “I think I might.” We took a picture and she told me to send it in when I applied to Tufts. At the time, the suggestion that I’d be going to college seemed so silly; I was a middle-schooler after all. 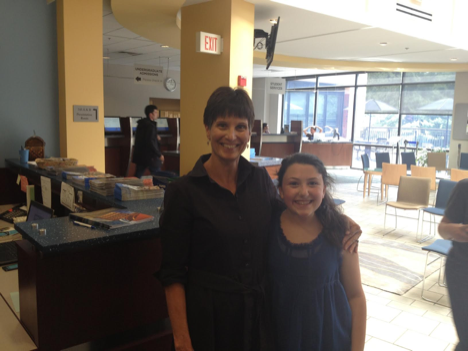 For many years that encounter remained nothing more than a fun memory from a family trip to the East Coast. But as senior year rolled around and I was deciding where to apply, that visit to Tufts stuck out to me. So I decided to dig up the picture and reach out. I learned that the admissions officer was named Kim Barth-Kembel and I sent her an email with the famous picture. Sure enough, she remembered me! All of a sudden, I felt like more than a piece of paper in a stack or a number in a database—I felt like a person. The college process can be so dehumanizing in turning students into a bunch of data points that it felt really great to have a school recognize my personhood, and that drew me to Tufts.  P.S. When I matriculated to Tufts, Ms. Kembel and I took another picture. You can see twelve-year-old me, jeggings and all, above.