My Introduction to Engineering at Tufts

I picked Engineering for no particular reason. I never had prior experience with building or coding. My school didn’t have anything close to 3-D printers or a robotics club. I didn’t even have a dream to work at NASA or make the next Facebook – I was never one of those people who had a firm grasp on what it was I wanted to do exactly. All I was sure of, coming in, was that I had no idea what kind of engineering I’d end up liking, assuming I stayed as an engineer at all.

This had me feeling really uneasy in my first Intro to Engineering lecture. My class was titled “How to Make Stuff,” with the idea being to give you a taste of a few different types of engineering and see how they felt. I had figured that everyone else in the class would have built their first smartphone at 4, or come barreling out of the womb holding a soldering iron. On the first day of class I had already felt ten steps behind because I thought it was expected of me to already be an engineer

That lack of experience turned out to be shared by a lot of people in the class; very few people knew what they were doing. This was comforting, but also made for an amazingly unique challenge. The classes whizzed from mechanics to metallic stress to coding and back to current, all at a speed designed to foster interest over mastery. At this stage of our lives, my friends and I weren’t really looking to spend hours in the minutiae of a topic we didn’t know if we liked or not. We wanted to experience the spectrum, to set our feet in a few different spots and see how it felt. As the class draws to a close I feel I’ve done just that.

Below is just a taste of that spectrum – pictures of what we’ve done in different fields and how they appealed – to me at least. 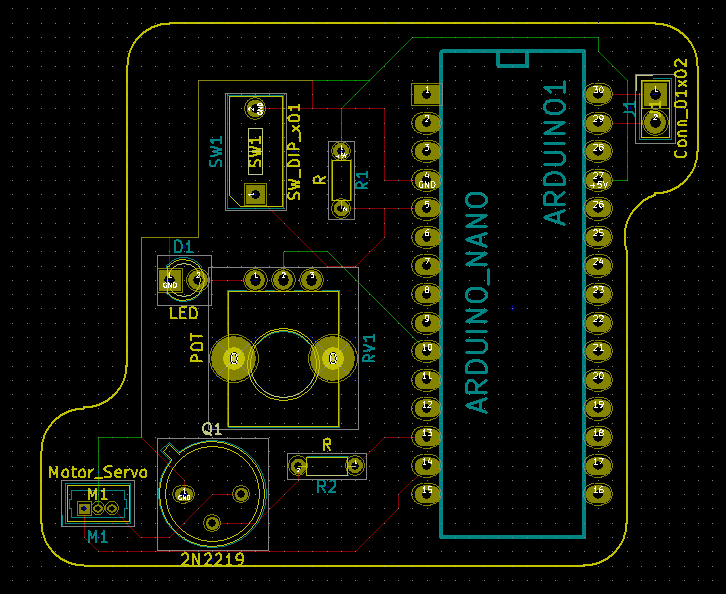 Compared to computer and mechanical engineering, electrical is the furthest removed from everyday life. Everyone has used a computer or seen a machine that moves. You can interpret them (to a degree) based off little other than your existence in the world – you understand them through osmosis. Circuit boards and soldering simply do not come up in an average person’s day-to-day on that same level. This made learning challenging, as I came from a much more ignorant position. I needed to grasp the basics of grounding a circuit, and what all the lines and triangles on a schematic actually mean. Once past that learning curve though, electrical engineering gave a breadth of control I didn’t realize. The picture above is a circuit board that will become a model lighthouse – LED at its top with a rotating panel around it to create the effect of the lighthouse turning. A very similar-looking board could power a planetarium, or an automatic light switch, or a programmable bike wheel. All of these and more are projects my classmates work on because nearly anything is possible in this space. 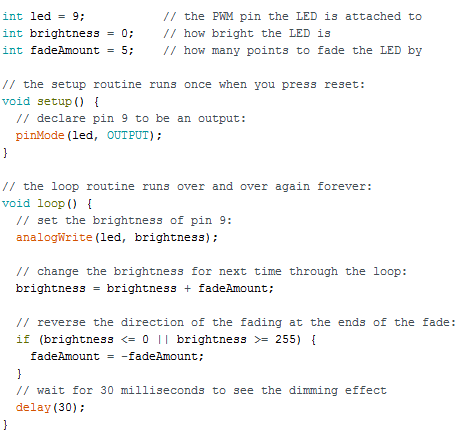 I was never fond of learning language in high school. It was hard to justify to me when I didn’t have a readily available, practical means to use it. There is no such problem in coding language, which is what the majority of the computer section of the class entailed. At the beginning, I was checking back to a reference sheet every four nanoseconds – if...then statements, end lines with semi-colons, analog vs. digital read, defining pins with names, did I mention ending lines with semicolons? It was overwhelming. By the time we were moving on, I would just type. The translating happened in my head, and I was able to bend an LED to my every whim or have a board send me messages about exactly how electric it is. Above is a line of code that makes an LED brighten and fade. Understand what this meant and knowing how to recreate it gave an odd sense of pride in how far I had come. The progression is tangible in a way Spanish never was. 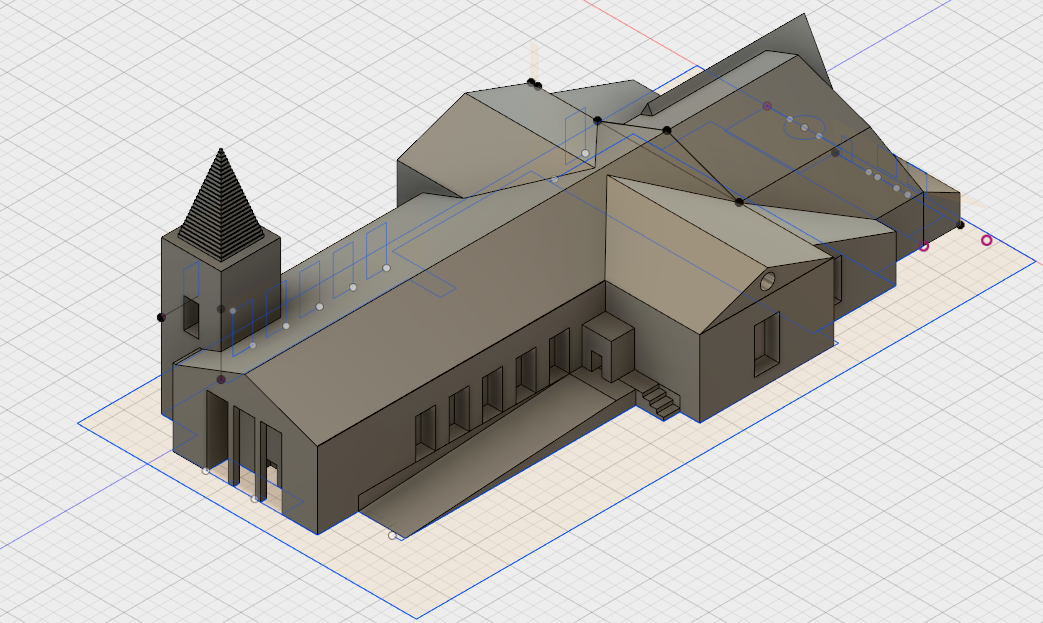 I will plead guilty to a bias – I am enamored with mechanical engineering. The process of designing the church you’re looking at right now solidified the differences between high school and college to me for the first time. We were told to 3D model and 3D print a building. No other requirements or expectations of any kind – just find a building you can see in person and recreate it. I spent the better part of a whole night, tape measure in hand, making a detailed map of the building. I knew how long each side was, how far the roof slanted, and how seemingly slipshod buildings were in the early 1900s. I spent about just as long creating this 3D model of it, agonizing over getting corners to look right and creating inefficient methods to render shapes I didn’t know how to make.

The most amazing part of all was watching it come to life. The fact that I was able to take a file, put it into a machine, and then watch as that machine turned empty space into a creation – my creation – is something that’ll never cease to amaze me. The capacity for creation is what draws me to mechanical engineering. Making something physical and putting in elbow grease to help it along makes you feel like you’re doing the impossible, even for something as small as a model building.

When you start as an engineer, you’ll find something captivating that’s unique to you. Maybe none of what I’ve mentioned will matter in your mind, and that’s fine. If you’re considering this field though, odds are something will hit you. And when it does, you’ll develop a passion even if you didn’t have one before. Happy building.

If someone were to ask me to pinpoint the moment I realized I might want to be an engineer, I would say it was one lazy Sunday afternoon some nine years…