It was 9:42 at night when my hallmate opened his door to me holding four avocados, the jubilant words “Guac Night!” tumbling off my lips. Ten minutes later, he was sprinting down the hall, banging on doors with the sanctified “Guac Night!” echoing off the cinder block walls. We took over the second-floor common room with paper towels and plastic utensils; Sean cut the onion on a collapsible camping bowl and Tucker mashed avocado in Pyrex Tupperware. Slowly, our fellow first-years emerged from their rooms with curiosity and anticipation, amazed by the primitive and superbly college-esque kitchen we had established. Arguments arose over whether or not the lime could be cut with a plastic knife—Sean won that battle with a little elbow grease—and whether to designate chili powder, tomato and cilantro as essential ingredients in guacamole. Matt was met with wide celebration when he joined the commotion, not only because he was finally walking after weeks on crutches but because he brought a proper, metal butter knife (a rare commodity in that dorm). Jojo banged on our FYA’s door to invite him to the party; with a combination of wonder and bemusement, Jack emerged from his room to find the common room bustling with avocado-deprived freshmen tasting the glory of homemade guac for the first time since coming to college. Interlopers came down from the third floor to witness the ruckus for themselves and steal a chip or two. As we all scooped the delicacy into our mouths, Lauren and I, the two Californians in the room, both sighed with a mixture of contentedness and nostalgia, exclaiming “It tastes like home.”

On that Wednesday in September, the residents of Bush Hall had holy communion in the form of chips and guac, assembled with a whole lot of chaos and love. Once the bowl was scraped clean, we took to pouring Cholula hot sauce in each other’s mouths and piling three people to a spinny chair. Sean brought his stethoscope and blood pressure cuff and started taking vitals for his EMT class—we all belted a song while he counted heartbeats. And after midnight, I lay sandwiched between Tucker and the chair, spinning softly while the five of us left debated music and politics; the guac was long gone, but the people remained. 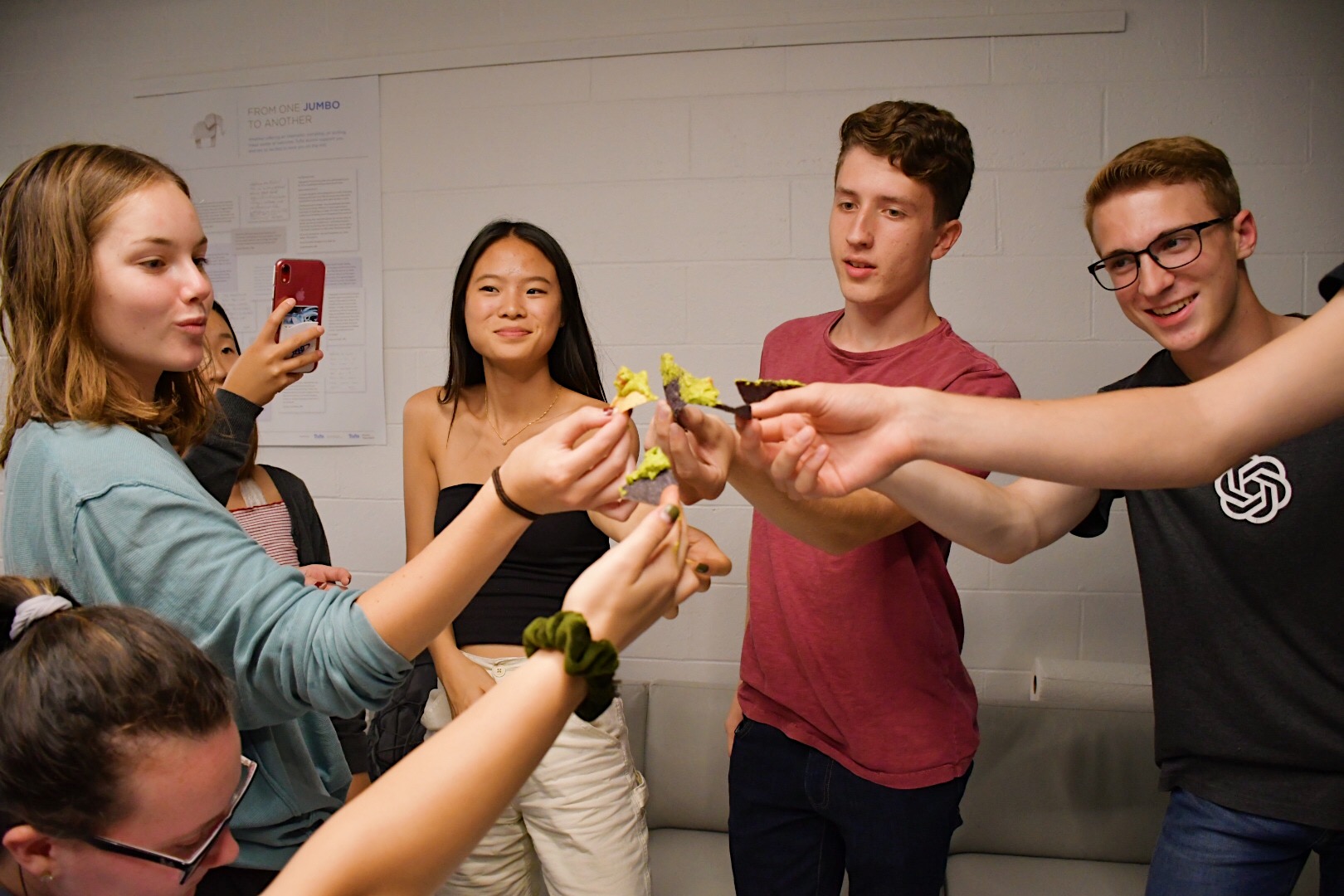 I’ve been thinking a lot lately about home, ever since I drove through my hometown at five am on August 25th to catch a plane to Boston. When I tasted that first bite of common-room guac, I was instantly transported to my kitchen in California, where my mom’s guac was always better than my own, where the avocados were plentiful and perfect, where our family communion happened. But I was also present in Bush Hall, my new home, surrounded by my new family of first-year siblings (with Jack the FYA as our dad). I’ve learned in my English classes that when food is present in literature, it is usually used as a bonding experience, a device to strengthen character relationships instead of furthering the plot. In our case, the food in question was pico de gallo chips and guacamole thrown together haphazardly in the common room. Guac will always taste like home to me—like California but also like downhill at Tufts University. If home is the people you love, then mine is the residents of Bush Hall; when it comes to community, nothing builds it better than avocado.