Fall: The Season of Harvest and Apple Picking

Growing up in three big, buzzling cities, the concept of visiting a farm on the weekends and picking my own fruits was extremely foreign to me. The only times I had ever been on farms were during school trips to rural China, Thailand, or Indonesia, all of which were too far for me to visit regularly. The cities I grew up in had endless events and activities to offer, but sometimes, I felt trapped by their concrete buildings and neon lights. I needed an escape, and it wasn’t until I came to Tufts when I realized that such an escape can come in the form of apple picking.

I went apple picking twice this fall, both times at Honey Pot Hill Orchards. The first time, it was with a small group of friends on the Tufts Social Collective (TUSC)’s field trip. Although it wasn’t my first time ever going to a farm, I realized it was the first time I had ever consciously made my own decision to visit a farm to pick apples. Excited, my friends and I boarded the yellow school bus at exactly noon, clutching onto the tickets that we somehow managed to get, because they ran out within five minutes of being released.

Honey Pot Hill Orchards offered endless rows of apple trees to get lost in. With the little knowledge we had on apples, my friends and I roamed through each section, picking only juiciest, most crunchy looking apples we could find. We held onto the ladder as each of us took turns climbing up to the top of the tree, and carefully caught the apples as they were dropped down to us, making sure that not a single one of them rolled away. Some of us couldn’t resist and began biting into the apples as soon as we picked them, while others saved the biggest, reddest apples so that we could bake an apple pie together later. We never did end up baking that apple pie, despite the fact that we all live together in the same suite and share the same kitchen, but the process of picking the apples themselves seemed just as rewarding as baking an apple pie would have been.

The idea of apple picking might be the most mundane activity to some people. But for me, it presented a way to leave behind my essays, worksheets, and readings for a day and be completely stress free. I was surrounded by my closest friends, completing a task that was simple yet rewarding. None of us needed the apples, as we could get them any day from any of the Tufts dining halls, yet we were all so excited to go apple picking. For one day, we held onto those apples as if they were our most prized possessions. It sounds silly, but there’s something special about bringing home our own fruits from a place that’s so vastly different from Tufts.

Coming to the US as an international student, one of my most preoccupying worries during freshman year was whether or not Tufts will ever feel like home. I’m a sophomore now, and to be honest, it’s experiences like apple picking that make me realize I truly have a community at Tufts within which I can feel at ease and at home. The apples I picked with my friends taste a thousand times better than the ones I get from the dining hall — not that the dining hall apples aren’t fresh and delicious too. But it’s the sense of community that apple picking brings, the relaxation of walking through a farm with a group of people that want nothing but the best apples for you, that make it feel special and extraordinary.

After a year at Tufts, my friends resemble family. We’ve traveled together, studied for exams together, and cried through movies together, but most of all, we eat together. Like apples, sitting across each other during a meal is the most normal, most unremarkable thing we can do. But at the end of the day, I don’t always remember exactly what we ate every time or exactly what the apples we picked looked like. I remember the conversations we had and the laughter we shared. Autumn is often referred to as the season of harvest, and while the successes we reap in fruits and academics are important, to me, the most uplifting gift that fall semesters give us is the beginning of new friendships and the continuance of old ones. When fall ends, a cold Northeastern winter will begin. It’s always nice to know that I can go into these winters with groups of people that make me feel nothing but warmth. 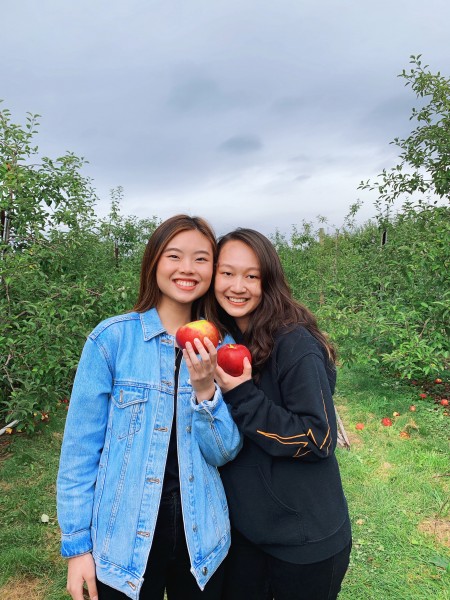