Energy at a Glance

On Saturday there was a symposium called the Tufts Energy Conference. I went with my friend Jenny who is a sophomore environmental engineering major. This conference was just one of two happening at Tufts on Saturday, the other one being MentorCon put on through Tufts Engineering Mentors. After a series of VERY fortunate events, Jenny and I came out of the energy conference completely awestruck. We had stayed two hours longer than we planned!

I rolled out of bed around 9 and made the 30 second walk over to the Fletcher School of Law and Diplomacy for the breakfast reception. Fletcher is a graduate school at Tufts focusing on international affairs: a very prestigious one at that. There’s a running joke that the Fletcher students are plotting in the library about how to fix the world. I don’t doubt it! After a delicious chocolate muffin and some coffee, Tufts President Anthony Monaco spoke to the crowd filled with Fletcher students, law makers, CEOs of companies, professors and some random undergrads like me! 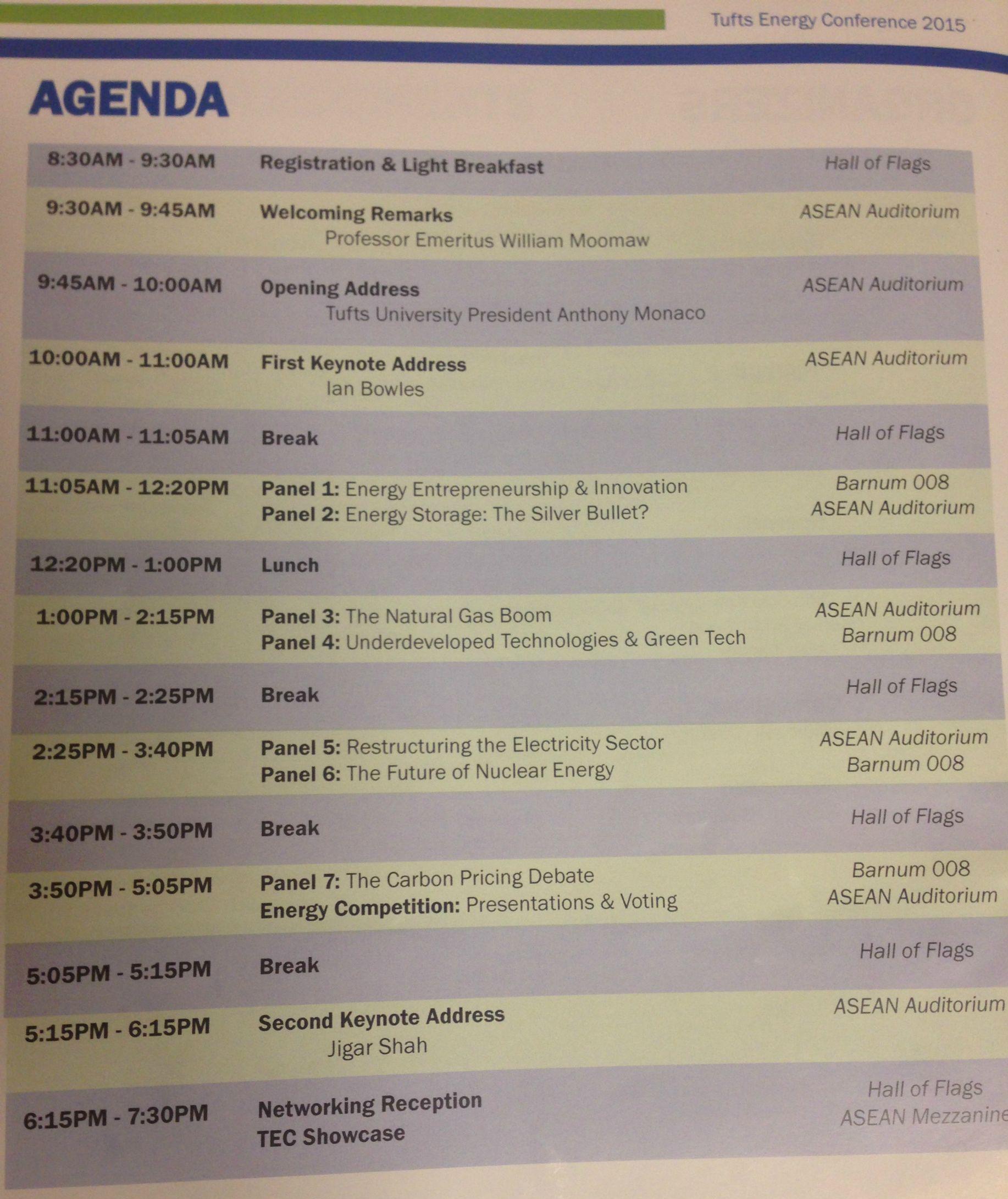 The conference hit every subject within climate change: clean resources, fossil fuels, economics, history, domestic and foreign policies, social activism of all sorts, and of course, science. I appreciated that engineering was just one topic within the conference. It made it easier to put my own major in perspective. This conference was relatable for everyone. Also, it was great to hear that Massachusetts is so far ahead in clean energy initiatives.

There was a lot of talk about externalities from both renewable and non-renewable sources. An externality is side effect to someone or something as a result of the main action. For example, deforestation kills habitats for animals in the rainforest. The bottom line was that it will be very hard to get a cheap way to pay for clean energy. Either we will use fossil fuels, have relatively cheap energy and hurt the environment, or just have a higher utility bill. Yet, the terms “NIMBY- not in my backyard” or “Nomub - not on my utility bill” represent threats even from people who support clean energy initiatives. And don’t even bring nuclear or natural gas into this discussion – these two topics make the discussion even more complicated!

One of the first panels was called “Energy Entrepreneurship & Innovation.” It was one of the best parts of the day. There were three panelists and a moderator and all are extremely accomplished. The panelists talked all about the next generation of workers, how to make climate change “sexy” and what they are looking for in their new hires. All the panelists stressed the importance of “big data”, and hiring students who have the ability to comprehend this data and clearly communicate their ideas.

What made this panel so special was the networking. Most of the time when I hear the word “networking” I want to run away. I’m fine at making small talk but it is still uncomfortable talking to strangers! I realized I was going about it all wrong: networking is not about the small talk. In fact, it’s the exact opposite. It’s talking about the things you care about and finding mentors throughout this world that will hopefully help you through your career. When you have something good to talk about, it’s fun!  I am actually excited to follow up with these people and possibly get involved with some of their projects!

I can’t stress enough how cool these people are. I have a very nerdy definition of cool, but still: these people know their facts and know their opinions on all aspects of energy. Of all things that struck me during this conference, it was the panelists and keynote speaker’s eloquence and public speaking prowess. When I got lost in all the statistics, policies or economic theories, I would observe the speakers talking. They know how to SELL their ideas. It takes so much researching, so many mistakes, and a lot of deep thinking to fully form an opinion, especially on something as controversial as climate change remedies. Yet, this conference stayed fairly bipartisan and emotionally neutral, making it much easier to fully comprehend opinions, even if some people openly disagreed with others.

Jenny found this conference just as nerdy-chic as I did. By having daily conversations with my professors and classmates in thermodynamics and mechanical design and fabrication, I can begin to accumulate a bank of knowledge about everything from history of science to the newest innovations in 3D printing. There are so many facets to energy, including the science, political science, psychology, urban planning, engineering and economic practices. I am working on forming my own independent opinions, and that's why I’m going to college! I’m excited to become an expert in something, but I’m glad to be exposed to everything related to energy. I’m not just bound to mechanical engineering!

This conference was exactly why I love college and Tufts. I planned to go to this conference purely to learn more about the clean energy industries in Massachusetts, and I came out with three business cards, two more emails of people to contact, potentially joining a new club for Women in Energy and a likely spot on the Tufts Energy Conference board for next year. After a great day, that’s one more commitment I am more than happy to take on.

Instead of doing practical things such as sinking my teeth into…