I entered my first semester at Tufts knowing I wanted to be an English major.  Now, two months into my second semester, I still want to major in English, but I’ve been thinking of possible double majors.  In high school I thought double majors were the stuff of legend; I was positive that the only students who ever graduated with two majors were extremely hard core and would go on to be the next Einstein.  While the latter is probably true, I’ve found that double majoring is actually a pretty normal occurrence here at Tufts.  When I first told my high school friends that realization, they all pretty much responded with: 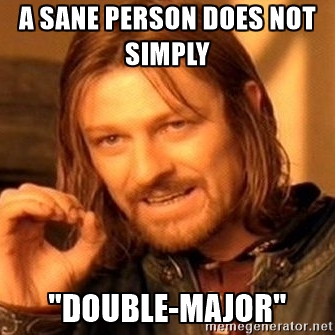 While taking on two majors does give you a bigger course load, I’ve found that the students who do double major (and there are a lot of them) don’t do it because they feel the pressure to.  They do it because they have SO. MUCH. PASSION and they have fun doing it.  Everyone at Tufts is interested in more than one thing, and it’s that level of interest that makes double majoring so popular here.  I have friends double majoring in Computer Science and Music, American Studies and Economics, and even Film & Media Studies and Peace & Justice Studies.

So, all this talk about double majors brings me back to what I’ve decided I want to double major in: English and Anthropology.  I’m in an anthropology class this semester and I must say, it’s one of the most interesting classes I’ve ever taken.  A year ago I didn’t even know what anthropology was, but now I can say with confidence that it’s the study of people and cultures and the endless loop of how society affects the people in it.  Sounds pretty darn cool, right?!  After only having around ten classes, I’ve already learned how to attempt to detangle social constructs (because let’s face it, social constructs are pretty ingrained in our society) and realize new binaries in our world.  You might think I’m fan-girling about this class right now and YOU ARE TOTALLY RIGHT.

Every Monday and Wednesday I learn a new idea about our society, and I’ve noticed the new sense of awareness I always feel when leaving that class.  All in all, I think my level of excitement fits the double major criteria, and if things keep going this well I will definitely be declaring two majors in my sophomore year.

Here’s another thing I’ve recently realized about anthropology: it has a lot of parallels to the Tufts community.  The art of observing and interacting with people with a slew of different beliefs and priorities, and seeing how that has shaped their lives is basically what anthropology is about.  Tufts is a home to some pretty amazing people; I cannot emphasize enough how caring and generally excited the community is.  For me the biggest pull towards Tufts was how genuinely interested the students are, and that’s something I’ve continued to feel in my time here.  The amount of conversations I’ve had about topics that I had never even heard about is unreal.  Even so, every time a new topic comes up, I still feel included and respected enough to voice my opinion, and I get to learn in a social setting which is a win-win in my book.

I’ve also had some pretty cool conversations about things that I’m already passionate about, like music, contemporary poetry, or even trigonometry (I know a lot of people didn’t like it, but I was a sucker for trig, it was so fun).  Two weeks ago a friend and I got invested in a conversation about whether there was a way for humans to gain the regenerative properties of a starfish.  Our theories, though far-fetched, were actually pretty science-based (especially for two people who aren’t STEM majors), and we thought we had just potentially saved the human race.  But, then we remembered that starfish don’t have bones, and that put a pretty sizable dent in our already thin hypothesis in terms of recreating bone structure.  After talking to our chemistry professor about it we realized that everything we said wasn’t really possible, but it was still an amazing conversation to have, and I’d never had the chance to talk about something like that before.  The fact that we had simply questioned something and ran with it was incredible to me.  Those are the kinds of conversations I live for, and at Tufts, I get to experience them and make new friends along the way. 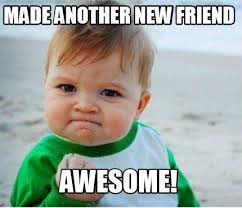