Finding Community through the Latinx Center

Even before I arrived on campus, I felt welcomed into the Tufts community by my peer leader that was assigned to me by the Latinx Center (LC). Over the summer, I received a letter in the mail from my peer leader, where she extended a huge congrats and welcome along with tons of advice to help with my move and transition to Medford (I was coming from Chicago and so did she!).  From that point on, I felt celebrated and a sense of belonging whenever I entered the Latinx Center. I could always count on walking in and seeing people studying while listening to Latinx music and giving hugs as people walked in and out. The Latinx Center was a place that I called home and here’s a few reasons why: 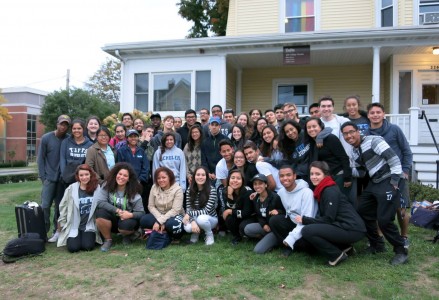 • Latino Center Retreat: Each fall the Latinx Center takes first-year students and their peer leaders on an overnight retreat. That was where the deeper connections to the community began for me because we were able to delve deeper into topics and issues that we faced as Latinxs on campus.

• Annual Holiday Party: When I first arrived on campus, I was so nervous that I wouldn’t be able to find Latin food but the holiday party was the perfect example of the way our community can make it happen. Not only did the Center cater food from local Latinx restaurants but it was also potluck style so students brought dishes specific to their culture. It was during the holiday party that I first tried yucca and many other dishes from other countries.

• Late Night Study at the LC: I was the type of student that liked to study in a comfortable space that was not my room. Since the LC grants students 24 hour access to the space, I spent many nights doing work until 3 am in the Center but the people were what made it memorable. During late nights, we would have time to focus on work, but would also burst into salsa or bachata lessons. Or for every section of the reading we did, we played a round of scrabble. It was those nights at the LC that reminded me that it's okay to take breaks and that I was surrounded by a community that valued me. 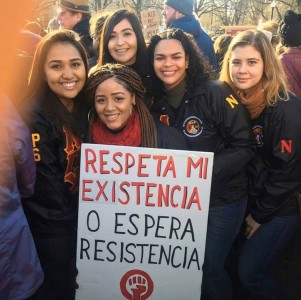 The Latino Center supports a number of different Latinx student groups. LPC is a latina-based but not Latina exclusive sorority that aims to uplift communities of color. I didn’t think that I would join greek-life at Tufts until I learned about LPC. I wanted to be involved in an organization that cared for the community and the Hermanas of LPC embodied that dedication to la cultura latina (the latinx culture) and la comunidad (the community). I joined my junior year and am still actively involved in the graduate/professional chapter now. I’m in it for a lifetime!

• Latinx Graduation: This is where we received our Latinx Center graduation stoles. I attended it each year because it was inspiring to see the community come together to celebrate each other's milestones. I loved how personal it was (so many baby pictures on the tribute slideshow) and how each graduating senior was able to have their moment and be celebrated by the community. It was amazing to be surrounded by so much Latinx excellence!

The Latinx Center was an integral part of my Tufts experience as it provided me the space to be authentically Latina in a predominantly white institution and connected me with some of the most inspiring professors and peers that share the drive to uplift our communities.

Gracias to all the individuals who continue to make the Center a warm and inviting place!