Learning Outside the Lines

In the Experimental College, timely issues and particular passions aren’t just on the syllabus—they are the syllabus. Each semester, the ExCollege offers a set of courses that aren’t typically taught by traditional professors. Instead, they’re taught by experts in the ﬁeld, community members, and Tufts juniors and seniors. 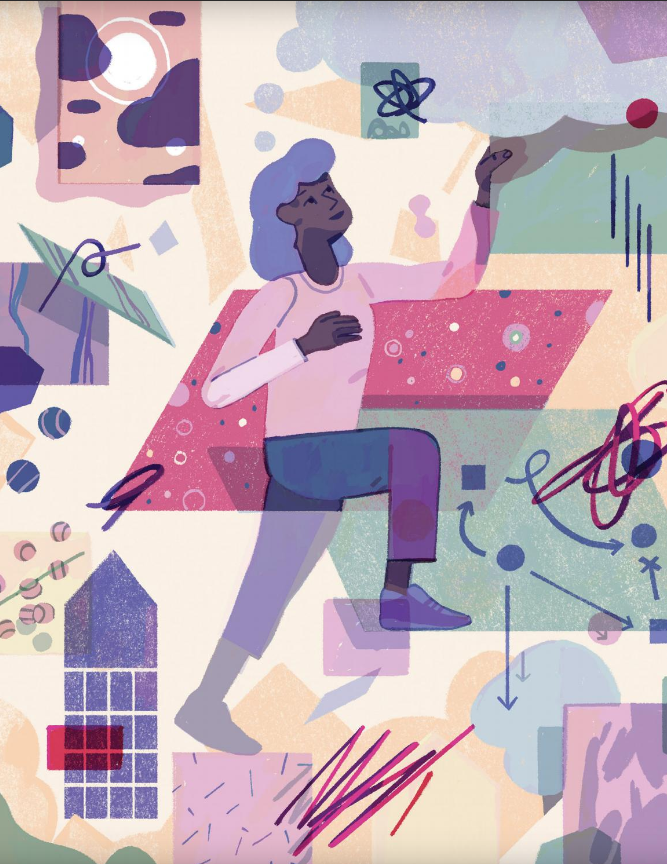 At first glance, the home base of the ExCollege is in no way ﬂashy: a brown house with a long driveway, located at 95 Talbot Ave. It isn’t meant to be ﬂ ashy, though—to me, it feels homey and welcoming. Inside that comforting exterior is a group of people working to provide a different kind of learning experience at Tufts. In truth, it’s a learning experience that isn’t as experimental as it is one-of-a-kind.

In one of the converted ofﬁce rooms, Director of the ExCollege and Associate Dean of Undergraduate Education Howard Woolf is replying to emails, texting students, and rushing to meetings. He describes his history with the ExCollege as “long and personal”—not an uncommon answer for anyone, faculty or student, who has been welcomed into the ExCollege over the years. “I began working at the ExCollege in 1982 when I was still in graduate school, [earning] a degree in American studies,” Woolf explains to me.

He immediately connected with Robin Gittleman, then the director of the ExCollege, during his interview process. “We had lots in common. We were both left-handed and we had both been camp counselors. I really think that’s why I got the job,” he chuckles. Since then, Woolf has seen the ExCollege grow and expand, while he has remained a constant. Think of him as Tufts’ very own Dumbledore: wise, knowledgeable, and always open to a fun discussion.

Woolf describes the long history of the ExCollege, from its founding in 1964 when it became the ﬁrst ever Tufts faculty committee to include an equal number of students on its board. From then, the ExCollege began offering unique and innovative courses for Tufts students, everything from Urban Poverty in 1968 to Zionism Reconsidered in 1973. “It was this place for students to explore new and different things, subjects that catered to students and were engaging,” Woolf says.

These varied from visiting lecturer courses to student-taught courses. It was in the ExCollege, a place designed for the birth of new academics, that Woolf discussed the idea of starting to teach ﬁlmmaking courses at Tufts. “Multiple programs have been born from the ExCollege, like Dance and the Institute for Global Leadership,” Woolf explains.

He sees the ExCollege for what it is—a place where students truly have control of their educations. Its role changes over time, as students and visiting lecturers bring in ideas for courses that are not only timely, but focused and insightful. In other words, the ExCollege has been responsive and continues to be. “We’ve changed an immense amount and yet we haven’t changed at all. It’s a conundrum, but it’s true,” Woolf laughs.

One thing that hasn’t changed about the ExCollege is its commitment to offering ﬁrst-year courses that are designed to
welcome new students and show them the unique academic opportunities Tufts has to offer. This is called the Explorations Program, and it’s been around almost as long as the ExCollege, beginning in 1967 as the Freshman Seminar Program, which offered the ﬁrst for-credit, peer-taught courses in Tufts’ history.

Today, Explorations allows upperclassmen to serve as peer advisors for the ﬁrst-years who enroll in their courses. So, what are these courses about? This semester’s range from Politics by Other Means: Simulation and Strategy Games Throughout History, to Bending the Norm: Sociopolitical Commentary in The Legend of Korra, and The American Soul: Religion, Mindfulness, and Spirituality.

First-year Yonatan Margalit, nicknamed “Tuna,” is only a few weeks into his Explorations course and is already fascinated by the ExCollege. While eating a peach in my Houston Hall dorm room, Tuna explains that he is taking What Does It Meme? Memes in American Culture and Media, a course that looks into the contemporary history of internet memes and their impact. “We meet once a week for two hours and it’s the most interactive class I have,” he says.

Tuna loves how the course focuses heavily on class discussion and understanding rather than just pure lecturing. “The course seemed really interesting when I was choosing my advising option, and I’m glad I picked it,” he says, nodding. “The advising process during orientation was stressful, but my teachers [Aidan Rowan ’20 and Michael Kiang ’20] and my advisor [Madeleine Delpha] were really helpful.” The Explorations course is just Tuna’s beginning with the ExCollege, but he’s already looking towards the future.

He explains how another course, Baseball Analytics: The Sabermetrics Model, is inspired by what he wants to do for his career, and that he had an idea to create a course on Kanye West, speciﬁcally the rapper’s history and controversy. “He’s one of the few celebrities you could have a course on,” he says. The ExCollege is a place for timely topics and courses that are often only offered once. Someone will have to break the news to Tuna that he was already beat to the Kayne class (it turns out the ExCollege offered a course on West in the spring of 2017), but I have no doubt a new idea will come to mind.

Even as the ExCollege changes decade after decade, some aspects—like popular courses—remain. Visiting lecturer Sonja Spears’ Accused: The Gap Between Law and Justice is a perfect example. In Diesel Café in Davis Square, Spears explains to me over coffee how she began at the ExCollege: taking classes. “My personal experience with the ExCollege was as a student. I took ExCollege courses way back in the day. I’ve had this love for the ExCollege, and I began teaching in 2013,” she says, smiling. Spears graduated from Tufts in 1986 and went on to be elected to the civil bench in New Orleans. She served as a judge for 12 years, so the course is not only professional for Spears, but also personal.

Accused: The Gap Between Law and Justice explores the United States’ justice system through different lenses, speciﬁcally the point of view of the wrongfully accused. “We look at some individual cases and personal stories so students can get that perspective that isn’t always shown to the general public,” Spears explains. “First, we introduce personal effects of what happens when a person is accused, and then we look at notions of justice.” Spears describes the course as “centered [on] humanity,” allowing students to understand real and honest perspectives of the wrongfully accused.

It  sounds like an ExCollege class I’d love to take (if only it didn’t ﬁll up so quickly…). Spears feels the same way about other ExCollege courses. She explains how exciting it is to see all of the different courses listed at the beginning of each semester. “In some ways, I wish I was a student,” Spears laughs.

Some of the most unique courses taught aren’t from visiting lecturers like Spears, though. They’re from Tufts students who have designed their own courses and dedicated themselves to exploring a new and interesting topic. One such student is Elise Sommers.

In the Tower Café in Tisch Library, Sommers sits across from me and explains how they fell in love with the ExCollege: Sommers took a class their sophomore year called Rethinking Disability: From Public Policy to Social Movements. This class sparked an interest in Sommers teaching their own ExCollege class, which Sommers did in their sophomore spring. “I felt really supported and had this amazing group of students that were just so interested in it,” Sommers explains. The course, Queering Childhood: Examining Innocence and Identity, is making a reappearance this fall through Explorations with Sommers co-teaching this time around. 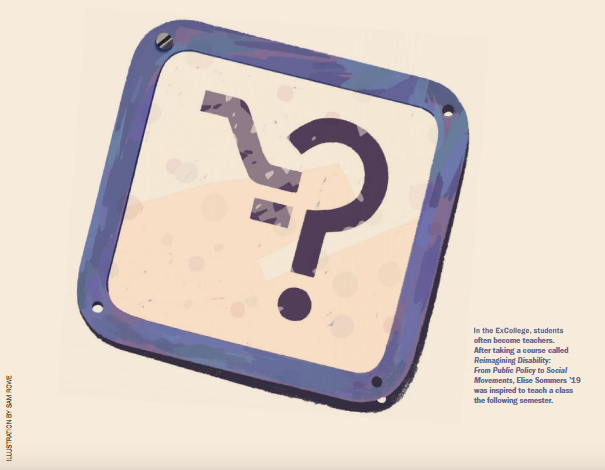 “The class looks at how we [view] children societally and how that connects to systems of power and impacts lived experiences of children,” Sommers says. “We talk about innocence, who gets to be innocent, racial innocence, and how that connects to prison abolition movements. We also look at coding of queerness in children’s media, and the way that’s coded in Disney and Harry Potter.” It’s a course that showcases a variety of topics that Sommers is passionate about.

In terms of the ExCollege’s presence in Sommers’ education at Tufts, they explain how transformative taking, designing, and teaching courses has been. “The ExCollege has played a really big part in making space for me to [create] an education that I wanted and to go deep into what I wanted to do,” Sommers says, smiling. That statement is perhaps applicable not just to Sommers, but to anyone who has the opportunity to learn and grow within the ExCollege.

Now, after recently celebrating its 50th anniversary in 2014, the ExCollege sits as a vital vein on campus—and also a key component of my Tufts education. The ExCollege was one of the main reasons I applied to Tufts, and now, as a student on the ExCollege Board, I’m so excited to continue its strong legacy. To me, it’s a place for learning the unexpected, teaching with passion, and creating something new. True, the ExCollege has evolved in its 54 years, changing with the times and offering cutting-edge courses. What hasn’t changed, however, is the very core of the ExCollege: that it is a place for students ﬁrst.

Read the original version of this feature, and discover more stories, in the fall issue of JUMBO Magazine!