Numbers are fun. Quantification is the quintessential human method of progress, whether it’s the number of Facebook friends, stars on Yelp, revenue this quarter, stock prices, or touchdowns scored. Even better, we’re surrounded by databases of numbers describing everything around us. As a person with analytical tendencies, I get excited about doing this with these numbers, and as a computer science major, I want to automate that process. At the past hackathons I’ve been to, when I wasn’t working on my official project, I figured I’d try to interpret some of these numbers.

The first weekend of February was the Tufts Hackathon, which I co-organized with my friend Will. As a result, I spent most of the event moving chairs, feeding people, passing out swag, and tweeting. Now, I’ve always noticed a casual correlation between my attendance at hackathons and the frequency of tweets that I send out. Sitting on a computer all night can inspire you to broadcast more of your 140-character thoughts. I figured I’d formalize this theory with a graph: 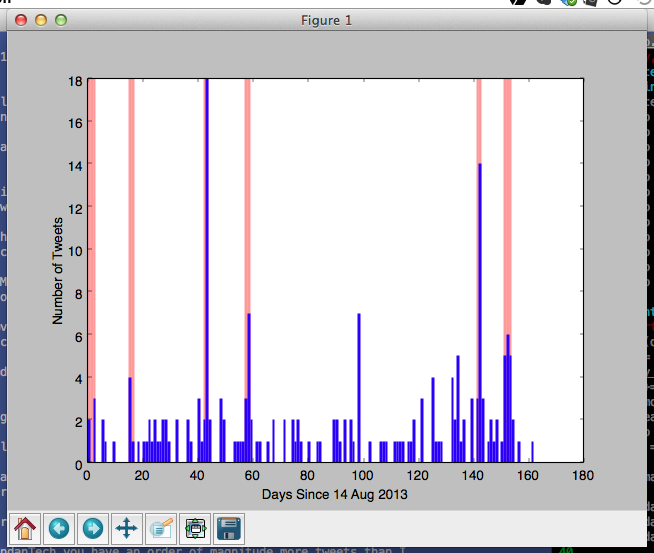 Purple bars are my tweets. Pink bars are days I was at hackathons. Suspicions confirmed.

Then, at PennApps, I was playing around with the Rotten Tomatoes API and animals, and I determined the following conclusions:

If you think this is ridiculous / made up, check out the code. I included instructions on how to run it yourself, so try it out and see what you think!

Do you think my claims are totally false? Am I misinterpreting the data? Want to hear about the super sketchy things I did in the Twitter project that made me too embarrassed to put the whole codebase online (Hint: look at the units of the x-axis)? Leave a comment or tweet at me!

I animated some fat bears and watched a lot of Veronica Mars.

… a couple of days late. I apologize but spring break, the California sun, and fun times with friends gave me an opportunity to think of something other…

Instead of doing practical things such as sinking my teeth into…