I said I would be back with an update, and here I am— in the process of becoming a sister of Kappa Alpha Theta!  It feels like so long ago that I was waiting to open my bid, but it was only a few weeks back.  Since then, I’ve gotten to know many of the girls in Theta through official events, like making valentines, and unofficial ones like dinner with my new member class.  But let me back up a little bit.

Overall, the process of recruitment was pretty easy.  Honestly, the most difficult part was figuring out how to dress for the cold and still manage to look good.  Sweatpants under a dress was not unusual most nights, and though we felt ridiculous, we ALL felt ridiculous.  It was only three days of events, and each day narrowed the field a little bit.  It was mainly time spent getting to know the sisters and learn about their sisterhood.  Panhellenic council, the organization that oversees Greek life, really tried to make the whole process more fun than stressing, and they did a wonderful job.

Last time I wrote, it was right before the first night of events, in which each of the four sororities hosted 30 minute parties.  One or two potential new members were paired with a sister just to have a casual chat.  It was difficult because it was so much talking, but it wasn’t at all stressful.  It was great to get to meet so many amazing women and find out what greek life meant to them and how they have grown through it.  The stories they told me about times when their sisters were there for them really made me want to have that kind of support group as well.  That, as well as my promise to myself, made me see it through until the end.

Going through the process as a junior made me feel old and awkward sometimes-- all these freshmen talking about living in Hill Hall!  Not knowing their majors! Dealing with Intro Economics or Freshman Writing Seminars!  Sometimes when I mentioned my class standing, a few eyebrows went up, but the women understood where I was coming from.  Everybody gets the feeling that they want to branch out.  Not everybody decides to join a sorority because of it.  So while it was easy to be embarrassed, being a member of a Greek organization is for life, so even if I'm two years late to the party, the party is just getting started. 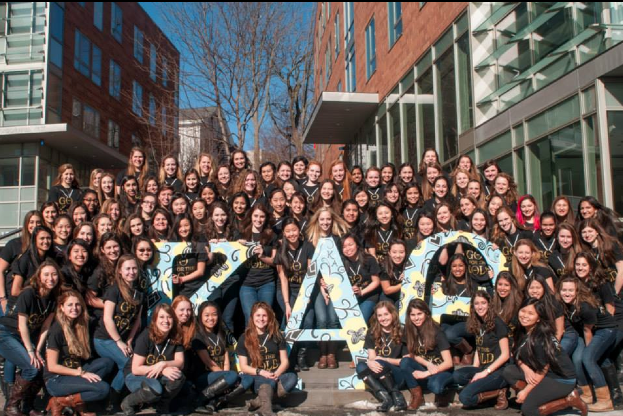 After 3 nights of events, bid day was upon us.  Each of the potential new members got an envelope, which we were then told to sit on.  I tried to play it cool, but my heart was racing.  When, after about 20 minutes, we were allowed to open them, there was so much excitement from the new members and a huge amount of love from the sisters.  I didn’t expect to be so nervous, but I was definitely feeling it.  I knew I would be happy wherever I ended up, but just the fact that we didn't know was killing me.  Ripping open the envelope was like taking a big breath of fresh air.  I can't imagine what the freshmen were feeling!

So that’s where things are now.  Thus far, I’ve had some great experiences with the girls.  Because Theta was started just last semester, being an upperclassman is no big deal at all.  Everybody is new, I'm just a bit newer.  From movie night on Valentine's day to dog walking for one-on-one time with a sister, it’s been wonderful.  The Theta sisters are confident, supportive, caring, and fun-- all qualities I hope to further develop within myself.  These next two weeks are full of bonding events leading up to initiation, so I’ll be back to blog about that, once I’ve had time to figure out what Theta means to me.

Photocred to the wonderful Nicholas Pfosi, awkward cropping is my fault.  Nick is too good for that.

To all incoming/potential freshmen that are looking for a taste of what Tufts classes are like this is definitely a post for you. And when it comes down…

In walked luck and you looked in time

I'll stick with you baby for a thousand years

Nothing's gonna touch you in…