Well now that I’ve gone jumping off a mountain, I think it’s time for more parental-approved pastimes, like baking.  When I’m at home, I love to bake.  I like to eat the cookies/cake/cupcake, but baking itself is a good time.

One thing I learned from the pre-departure meeting is that they don’t have chocolate chip cookies in France.  Chocolate chip cookies are a staple around my house (you’d be surprised how many friends you make when you have cookies), so I knew I had to make them in France.  My family here eats really really well, but when I showed them the bag of tollhouse chips that I had brought with me, they (the son especially) were thrilled.  I thought I would do it on the first or second day I was here, but stuff piled on, and there were people to meet, hikes to take, and homework to do, so I didn’t get around to it until now.

I’ve done a bit of cooking before this.  My host mom went to Lyon for a week and left me and Paul (15) and Olivier (22, another student at a French university) here alone.  I decided that I would step up and make dinner.  I was super nervous, because cooking for people is nerve wracking, but cooking for French people is a whole different ball game.  I decided to make a family favorite: spaghetti pie.  It’s basically just pasta with sauce and ricotta cooked into a pie shape.  My family likes to make it at home, so I figured why not here?  It went over surprisingly well, but then I realized that I was feeding two boys cheese and pasta and there was no way that it would be anything but a success.

I also made zucchini bread for the family about a week ago.  Zucchini (courgette) here are super cheap, so I thought I’d give it a whirl.  I had my mom send me the recipe, but I didn’t follow it to the letter, instead just adding things until the batter tasted right.  My family took it with them to a friend’s party, so I think it worked out well.

But today was finally cookie day.  I had the recipe and I knew what to do.  There were a few problems, like the lack of baking soda (they only have baking powder), and the fact that shortening doesn’t exist in France.  Instead, I used copious amounts of baking powder and butter for shortening.  The biggest issue was that they use grams here, and I’m used to cups.  It was an extra step, but I used an internet converter and a food scale to try to get approximately the right amount of everything.

It didn’t mix up as smoothly as it does at home, but it tastes about right.  Now, I’m a big proponent of chilling the dough to get a better cookie, so I’m leaving it in the fridge while I go on an overnight hike, though I did make a test batch.  Sunday morning, I’ll finish the rest of them and hope for the best! 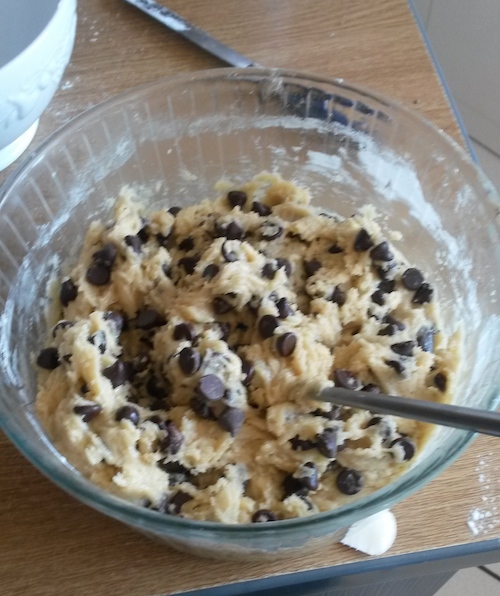 About the Author
Posted In
Travel/Study Abroad
Related Articles

Laurent let me steer for a while!

[Check out part 1 of this 3 part series] When it comes to learning a language, what could be better than study abroad? Having studied abroad in the United…