I Do Declare (My Major)

I am (and always have been) extremely indecisive.  For the past year and two months, my SIS Portal (student information system) has proudly shown this by adorning its "Major" section with the label "Undeclared."

When I applied to Tufts initially, I described my desire to be a Psychology major.  I was intrigued by the field's focus on asking "why" and searching for answers.  I was always interested in psychology, but once I got to college, I was conflicted.  Every course that I took made me increasingly more interested in the department that taught the class - Anthropology, Child Study and Human Development, Sociology, American Studies, Women's, Gender, and Sexuality Studies.  I stayed up late at night writing out different combinations of courses for future semesters, attempting to see how many majors I could squeeze in during my four years at Tufts.

In a sudden turn of events, I took Introduction to Peace & Justice Studies (PJS) this semester.  Within the first days of the class, I realized that PJS tied together my various passions/interests and officially declared it as my major!  It happened so quickly and I was surprised by myself for making a decision so early on in my college career. 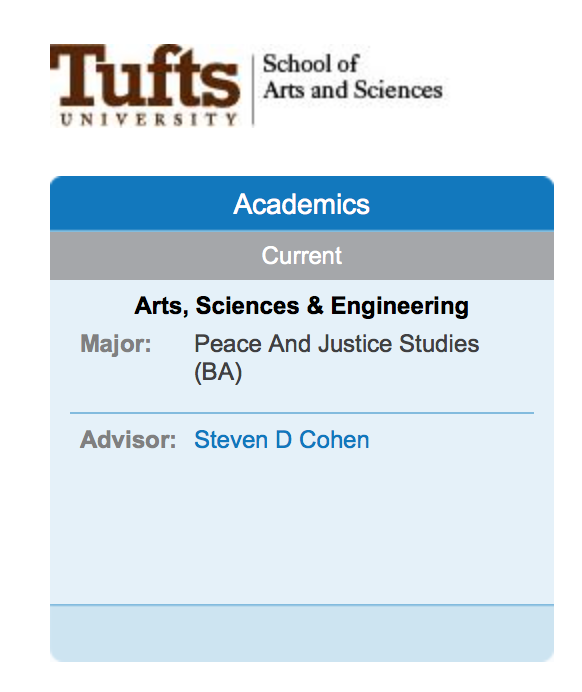 I realized something throughout this process, though.  It is totally acceptable to be interested in a bunch of things.  It is also totally okay to take courses in departments you find cool without majoring in them!  This is an idea that I am still getting used to, but as the cliché phrase says, college is the time for exploration.  So yes, I am declared and am officially a Peace and Justice Studies major (!!!).  But, I will continue to explore the wonderfully-strange variety of classes here at Tufts!

[Hope y'all don't mind the Gone With the Wind reference in my title!]

Trying to pick a college or university to go to has to be one of the hardest decisions out there for high school students. Based on limited information…